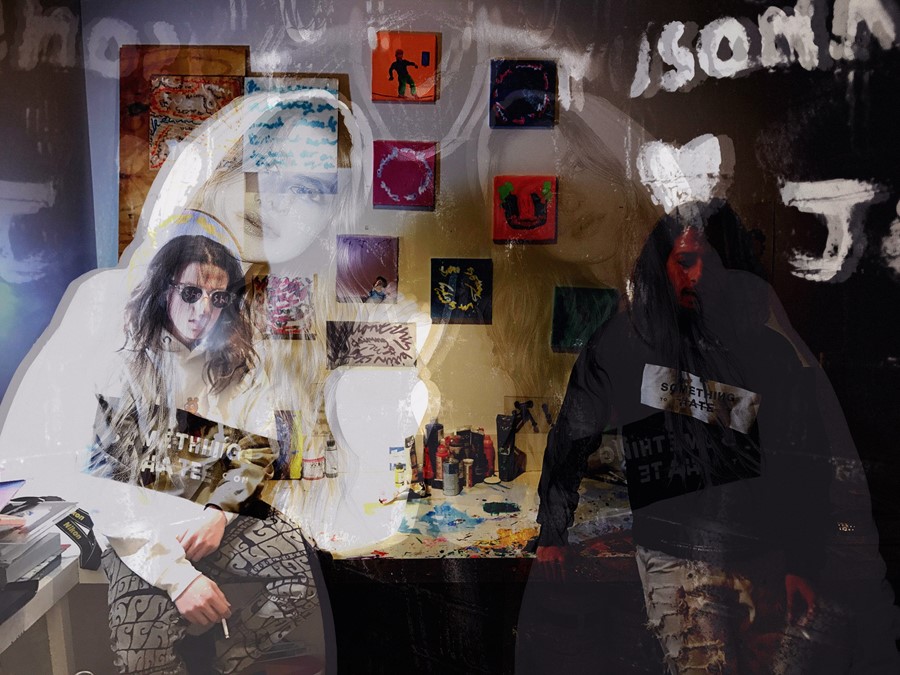 About eight weeks ago an Instagram page launched and populated itself with photos of young people wearing hoodies and t-shirts with the words “Something to Hate On” printed on them. A month later, a purchase link was shared, opening a gateway to buy into something that no one really had any idea what it was. Within a week or so, everything had sold out, and despite more demand – for hoodies which sold for £80 and long sleeve t-shirts for £50 – SHO quickly revealed it had no plans to restock.

Responsible for the decision was four London-born-and-bred 20-year-olds named Raff Law, Daniel Mould, Max Clarke and Basil Fisher – the brains behind what we now know is an art-music-clothing collective.

“The clothing was a form of brand identity”, explains Clarke. “We didn’t really know how to promote ourselves without having an event so we were like let’s stick our logo onto these and get it going,” adds Mould.

By doing so, they had led fans and followers directly into an online hype machine – a phenomenon constantly fed by our generation’s desire for anything relatively exclusive – and without even explaining what SHO was or stood for people already couldn’t get enough.

“It’s a phenomenon – as soon as something becomes vaguely popular, to have the opposite opinion becomes the cool opinion to have. Literally just to be different from what everyone else is thinking”

“At the beginning, (the name) was definitely just an ironic thing. The world we live in revolves around liking things and ‘hearting’ things and when something gains popularity, naturally it creates hate as well”, explains Clarke. “So if people are hating then they’re doing what we want them to do anyway. It’s completely ironic – if there’s hate, there’s love.”

“As soon as something becomes vaguely popular, to have the opposite opinion becomes the cool opinion to have. Literally just to be different from what everyone else is thinking,” adds Mould.

It feels natural, then, that SHO stems from a feeling of discontent. When Law, Mould, and Clarke found themselves uninspired by London’s party scene, they believed more could be done to harness the creativity they felt was sleeping beneath the surface. “We were hitting all these parties and there was nothing immersive about them at all, people would just turn up and drink – even though everyone in there was such a creative”, explains Clarke. “So we thought we may as well throw our own.”

“People get to see maybe just a little bit of underground, up and coming art and just the vibe and party spirit. One of the fundamentals we really wanted to stick by was making sure that everyone we work with is not already a huge name. We would like to help build people,” says Law.

As well as selling out their apparel, Instagram has played a major part in helping them connect to, and build, a community beyond their own. “I really like the idea of young people promoting other young people,” says Mould. “What was nice as well is that since we set up the Instagram, people from word have mouth have DM’d us with pictures of their stuff saying, ‘Can I get involved? I would love to do stuff’. One guy we literally just met off Instagram and he’s got his stuff here,” adds Law.

While anything birthed amongst an online realm tends to push itself along with an intolerable need-for-speed, instead of looking into some far-fetched future, SHO is simply looking towards what’s next. Which, at the time of speaking, was its “pre-launch” party that evening, where the collective stepped off of the internet and into the real world – taking over an abandoned space in Soho’s Greek Street that is set to be demolished in the coming weeks. Alongside works by 15 to 20 artists, the trio spent (and slept) eight days spray painting and hanging artwork across every inch of its walls. SHO also extended invites to friends, family, artists and collaborators such as musician Cosmo Pyke, model Iris Law, and a jeweller, artist, and perfume maker named Ezra – who kindly gifts me a vial of his latest scent – to stop by and contribute. “About 40 hands have touched these walls”, Raff reveals. “I didn’t even know (my sister) Iris was an artist until she picked up a spray can”.

SHO filled the main room with DJ equipment and speakers, and invited underground DJs, MCs and musicians such as Illustrious One, Bakarr and Channel One Sound System’s Henry Skeng to soundtrack the event. At 10pm, throngs of people, armed with booze and searching for an alternative to fashion week descended on the space – an empty and sprawling flat that was handed to them with a “license to do what they want” by a man named Deano, who manages the building.

Once the hangovers subside, the next thing on Law, Mould, and Clarke’s minds will be building their resident artists up – of which there are seven so far – and organising a “more refined” exhibition to showcase their talents. And while it’s difficult to measure success at such an early stage, it’s refreshing to meet a group that, while full of energy and ideas, is under no illusion as to how difficult it is to make it in the art, fashion and music worlds – let alone to bridge them.

“We are going to watch it naturally evolve to whatever it evolves to”, says Finn, one of SHO’s artists who’s hanging about the space putting the finishing touches on his art. “It’s really organic, and when you think about something like Boiler Room, all that was was a guy being like, ‘I want to film sets in my bedroom’, and now look at what it is now.

“That avoids anyone feeling like there are mistakes and stuff because when you try to have something that’s not tangible you find yourself not going towards that route, then you’re like ‘Why am I doing that?’ Then it can sort of bring it backwards”. Law chimes in, refreshingly optimistic by the uncertainty of it all, “This could go anywhere – do you know what I mean?”